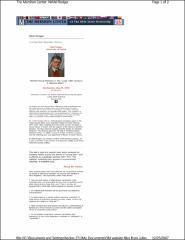 The British navy in the age of Nelson cultivated an ethic of destruction that has rarely been seen in warfare at sea (when Nelson chided his ship's carpenter, after his great victory at Copenhagen, for failing to make the captured ships seaworthy, the carpenter boldly replied: “Your Lordship is so much better at smashing ships than I am at repairing them.”) What were the origins of “the Nelson touch”? Was it the influence of one man, of a social class, or of exposure to the constant carnage of warfare afloat?