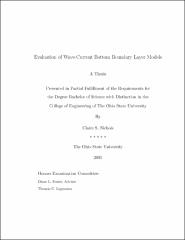 Widespread beach erosion is threatening American coastal environments making coastal engineering, especially sediment transport, a rising field of interest. An improved understanding of sediment transport will help us to combat coastal threats such as beach erosion, harbor siltation, submerged object scour, and coastal structure failure. In coastal environments sediment is transported by both currents and waves. This environment is complicated because waves and currents interact in a way that does not allow for a linear sum of their separate behaviors. In this effort, the wave-current bottom boundary layer physics are examined with several applied engineering models and with a more sophisticated numerical model. The models are evaluated with the mean bed stress, a parameter used for the bottom dissipation calculations in circulation models, and the peak bed stress, a parameter used for quantifying sediment transport. The numerical model, Dune, used in these calculations is a quasi-three dimensional, non-hydrostatic numerical model. The model resolves the relevant dynamics of wave and current boundary layers over smooth and rough movable sand beds and includes models for the two modes of sediment transport, bed load and suspended load (Fredsoe et al, 99). Model calculations were performed for 7 wave periods, 20 wave velocities, 10 current velocities, and 2 wave-current angles. The calculations were compared with three models currently used in engineering practice (Grant & Madsen (1994), Soulsby (1993), Styles & Glenn (2000)). Predictions of the mean and peak bed stress by Dune and the three accepted wave-current boundary layer models are generally of comparable magnitude. However, predictions of the mean bed stress by all three engineering models diverge from Dune when the wave velocity is greater than the current velocity. An obliquely approaching current does not have a significant effect on the peak bed stress, but does affect the mean bed stress under large wave forcing. Predictions of the peak bed stress by the Grant & Madsen, and Styles & Glenn models are consistent with the Dune simulations at large wave periods, but are larger than the Dune simulations for the smaller wave periods, indicating a greater sensitivity to inertial effects produced by the waves. These results show that there exists model divergence when the unsteady wave forcing is larger than the mean forcing. This summer the models will be evaluated with field observations obtained in a large-scale wave flume.