Impulsivity and Psychopathy in Adolescent Smokers and Nonsmokers 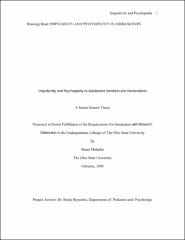