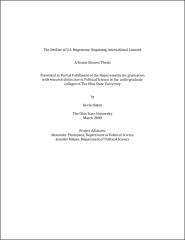 This study uses United Nations General Assembly voting data between 1992 and 2005 as well as public opinion surveys from many countries to examine American authority and hegemony in international relations. The data is also used to compare the strength of that authority between the administrations of William Clinton and George W. Bush. In comparing the two time periods, it appears that the U.S. had significant authority over NATO countries in comparison to non-NATO countries during the Clinton years, and that authority declined significantly during the Bush presidency. After establishing these conclusions, potential outcomes of an international system characterized by declining authority are overviewed. Finally, based upon the findings, three options for future American policy are elaborated.