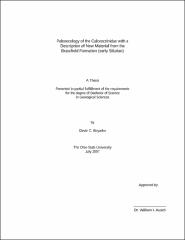 The Calceocrinidae is the longest ranging crinoid family, from the middle Ordovician to the early Permian. Unique morphology led to a mode of life that proved to be successful for approximately 230 million years. Many life models have been suggested for the calceocrinids. However, they are interpreted to be leeward passive suspension feeders that thrived in a number of environments throughout the Paleozoic. During the Ordovician, calceocrinids were best adapted to shallow-water carbonate platforms. During the Silurian and Devonian, calceocrinids preferred shallow-water carbonate platforms, however, they adapted to a wider array of habitats. During the early Mississippian, calceocrinids abandoned shallow-water carbonate platforms and moved to a deeper-water siliciclastic regime. The purpose of this study is to reexamine the paleoecology of the Calceocrinidae, focusing on their life modes and paleoenvironments. Further, new material from the early Silurian, Brassfield Limestone of Ohio and Kentucky is described.