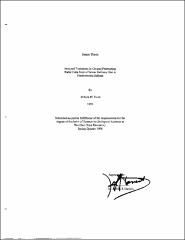 An initial environmental survey of an Energy Cooperative, Inc refinery revealed that hydrocarbon contaminants are leaking into the subsurface and ground water. Ground penetrating radar surveys were conducted by Ohio State researchers on five separate occasions from July 1992 to May 1993. The information from three of these data sets were processed using Silicon Graphics workstations to detect the extent of variations due seasonal effects.