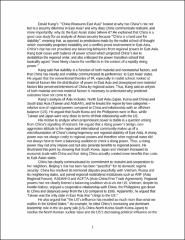 Why has China's continued rise not led to a security dilemma with the rest of East Asia? Why does China communicate restraint, and more importantly, why do the East Asian states believe it? Although realpolitik pessimists see China's rise as inherently destabilizing, there is little evidence that the system is devolving into balancing. Institutions are also weak in East Asia, and few believe that economic interdependence by itself will solve the security dilemma. The answer is also not the presence of the United States as an offshore balancer. Only Taiwan -- and perhaps Japan -- clearly rely on a U.S. security umbrella to balance Chinese power. Kang argues that China's expected emergence as the most powerful state in Asia has been accompanied with more stability than pessimists believed because of a social understanding about China's role in East Asia. On the one hand, China has provided credible information about its capabilities and intentions to its neighbors. On the other hand, East Asian states actually believe Chinese claims, and hence do not fear its rise as much as some scholars have predicted. This shared understanding about China's preferences and limited aims short-circuits the security dilemma.