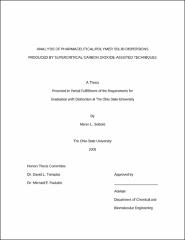 In the pharmaceutical industry, the production of solid dispersions is generally accepted as a method to enhance the oral bioavailability of drugs with low aqueous solubility. Two processes commonly employed to create solid dispersions are examined in this research. The first technique dissolves the drug and carrier in a common organic solvent and is followed by a solvent-removal operation. The second method processes both the drug and polymer in a high-pressure mixer with supercritical carbon dioxide. This method is intended to simulate the temperature and pressure conditions of carbon dioxide-assisted hot-melt extrusion. Organic solvent-based solid dispersion formulation techniques are accompanied by environmental challenges, due to disposal of the solvent, and are generally more costly than extrusion applications. However, the application of hot-melt extrusion technologies has been limited due to the temperature-sensitive nature of the drugs and the high processing temperatures associated with the extrusion process. The inclusion of supercritical fluids, such as carbon dioxide, in the polymer-melt extrusion method has proved to significantly lower processing temperatures, thereby extending the technique to thermo-labile compounds. Yet the properties of solid dispersions created in this manner have traditionally been unpredictable. This study systematically analyzes the properties of solid dispersions formulated by supercritical carbon dioxide-assisted techniques and compares these characteristics to those of solid dispersions created using the organic-solvent method. Composite samples of 4-aminosalicylic acid, a sample drug compound, and eudragit E100, an acrylate block copolymer, were formulated using both the organic solvent method and a carbon dioxide-assisted high-pressure mixing process. Due to the costly nature of the drug and polymer, the high-pressure mixer approach was employed to simulate extruder conditions in a batch operation and characterize the suitability of materials for extrusion. Drug-polymer composites were made using the organic-solvent method. The processing temperature of these samples was kept low so that it could be used as a standard to examine the effects of heat. In the high-pressure mixer technique, the same ratio of drug-polymer was processed with supercritical carbon dioxide. Process temperatures and carbon dioxide pressures were varied. Samples from each method were analyzed using differential scanning calorimetry (DSC) to measure thermal properties and Fourier-transform infrared (FTIR) spectroscopy to examine drug-polymer interactions and dispersion properties. High-pressure differential scanning calorimetry (HPDSC) was further utilized to examine the morphology of the composites while in equilibrium with carbon dioxide. Results of this study examine the use of a high-pressure mixer to simulate extrusion conditions and distinguish between composites made by organic solvent and supercritical carbon dioxide-assisted processes.