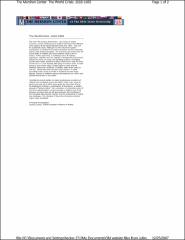 The mid-17th-century World Crisis – the series of violent economic, social, intellectual and political upheavals that afflicted most regions of this planet between 1618 and 1683 – cries out for systematic study. Coincidence cannot explain so many simultaneous eruptions of violence and revolution around the globe: what, then, were its causes and why did it affect some areas far more than others? My explanation involves a combination of five factors: a sudden episode of “global cooling”; the emergence of vulnerable areas of economic specialization; a sharp increase in religious and fiscal pressure by many (but not all) governments; the crumbling of the prevailing demographic regime; and the emergence of radical new ideologies. The interplay of these five elements produced major crises worldwide.