Presidential-Congressional Conflict in Domestic and Foreign Policymaking: A Fresh Approach to its Measurement and Explanation 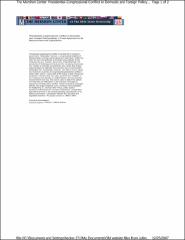 Presidential-congressional conflict is the leitmotif of American government. Historically, however, a congressional tradition of bipartisanship in foreign policymaking has meant that conflict has been far more characteristic of domestic policy debate. In the contemporary era, however, the erosion of bipartisanship, the prevalence of divided government and the increasing divisiveness of a number of overseas commitments have meant that foreign policy decisions in particular have become more controversial in Washington DC. Surprisingly, however, very little is known about the short-term dynamics of congressional-presidential conflict in either policy sphere. A good part of the reason is that nobody has produced a measure that, one, picks up short-term variation in the incidence and intensity of conflict between the two branches of government and, two, that can be used to sketch the pattern of similarities and differences in the character of foreign as opposed to domestic policy conflict. Content analyzing newspaper articles, this project proposes such a measure and investigates its relationship to, amongst other things, public opinion, economic performance and overseas involvement.