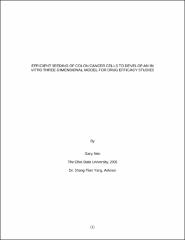 The project goal was to study different seeding techniques, static and dynamic seeding, to efficiently seed colon cancer cells onto a 3D matrix so that there was a uniform distribution of cells throughout the matrix with high cell density. Seeding the cells onto the matrix was done to develop a 3D in vitro model of colon cancer. Within the two methods, different variables were tested. The variables either pertained to the treatment of the matrix itself, the concentration of cells seeded to the matrix, or the hydrodynamics of the environment in which the cells and matrix are in. For static seeding, it was observed that as time elapsed from the point of cellular inoculation, the percentage of cellular attachment to the scaffold initially showed an exponential phase, but after six hours the attachment of cells flat-lined. The highest percent attachment observed was 61%. Utilizing first-order kinetics, it was determined that the rate of attachment for the concentration range of 0.5 to 7 million cells was consistently about 0.15 hr-1, indicating that within this range the rate was independent of the seeding concentration. Above this range the rates decreased by 33% or more. For dynamic seeding, it was observed that the effects of time on cellular attachment was qualitatively similar to that of static seeding, but quantitatively different. At any given time, the percentage of cells attached would be higher in dynamic seeding than in static seeding. Unlike static seeding, 100% of the cells introduced to the system attached to the scaffold, and dynamic seeding showed an increase in the attachment rate when the initial seeding concentration was increased. Although it was observed that there was an increase in the rate of attachment as the initial seeding concentration increased, extrapolating from the data indicated that the rate of attachment asymptotically approached 0.285hr-1. Therefore, the rate of attachment becomes independent of seeding concentrations at highly concentrated seeding levels. It was also observed that when the RPM of the system was increased, cellular attachment was reduced due to the increased shear stress supplied by the increase in the RPM. Although the main focus was on the different seeding methods, scaffold properties were also investigated. It was observed that a high porosity and hydrophilic scaffold improved both the quantity of cells that attached and the rate of attachment of cells by 140%.