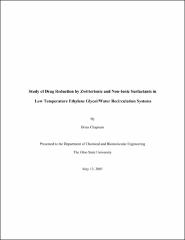 District cooling systems are an efficient way to remove heat from buildings and are being utilized around the world. Although they typically use water chilled at a central station to 5˚C as the cooling fluid, adding ethylene glycol to the water allows the fluid to be chilled to –5˚C, which will increase the cooling capacity per unit mass of fluid circulated and thus reduce the amount of cooling fluid required, thus reducing pumping energy requirements significantly. Through the addition of surfactants into these ethylene glycol/water systems, the drag can be further reduced in the turbulent flow through the pipes, reducing the pumping energy required to circulate the fluid, thus saving additional energy and money. There are generally four types of surfactants: cationic, anionic, non-ionic, and zwitterionic. Typically, cationic surfactants are effective drag reducers but are not very biodegradable. This research focused on testing other types of surfactants that are more biodegradable with the intention of finding more environmentally benign surfactants with equal drag reducing ability. The focus was mostly on zwitterionic surfactants, with some non-ionic surfactants being tested as well as mixtures of various types. Both commercial surfactants and surfactants synthesized by Dr. Hart and post-doc Dr. Oba, organic chemists in the Department of Chemistry, were tested. The tests involved with this research were conducted in a stainless steel pump and piping recirculation system. Measurements of the flow rate through the 10mm diameter pipe and pressure drop in the system were taken at specific temperatures. Temperature was controlled from –5 to 80˚C. Data were analyzed by computing the Fanning friction factor (ƒ) for the pipe flow, which is a dimensionless measure of the frictional shear stress effects at the pipe wall. The friction factor of the solvent (ƒs) was calculated using the von Karman equation, which depends on the Reynolds number (Re=ρuD/μ), where ρ is the solution density, u is the mean flow velocity, D is the diameter, and μ is the solvent viscosity. The drag reduction (DR) equation was then used, (%DR=(ƒs–ƒ)/(ƒs)*100 ), with surfactants having a %DR>50% being considered effective drag reducers. Surfactants were tested at various concentrations, or in the case of mixtures, different molar ratios. Sodium nitrite was also added in various concentrations to many of the solutions; it helps in drag reduction and can prevent corrosion of the metal walls of the circulation systems. The experimental results indicate that there are a variety of surfactants that are significant drag reducers over particular temperature ranges. For this project, the temperature range of most importance was that associated with district cooling systems (-5 to 15˚C). In this range, the most promising surfactant was oleyl trimethylaminimide, although there were other surfactants with significant drag reducing ability as well. Therefore, biodegradable additives are feasible for reducing drag at low temperatures in recirculation systems. Implications of this research are that further investigation regarding the promising surfactants’ properties should be performed.