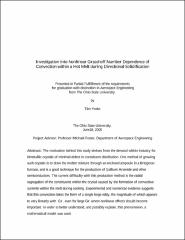 The motivation behind this study derives from the demand within industry for bimetallic crystals of minimal defect in constituent distribution. One method of growing such crystals is to draw the molten mixture through an enclosed ampoule in a Bridgman furnace, and is a good technique for the production of Gallium Arsenide and other semiconductors. The current difficulty with this production method is the radial segregation of the constituents within the crystal caused by the formation of convective currents within the melt during cooling. Experimental and numerical evidence suggests that this convection takes the form of a single large eddy, the magnitude of which appears to vary linearly with Grasshoff number, even for large Grasshoff number where nonlinear effects should become important. In order to better understand, and possibly explain, this phenomenon, a mathematical model was used.

Except where otherwise noted, this item's license is described as Public Domain Certification