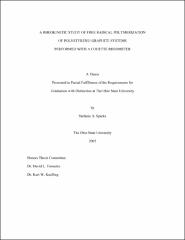 This thesis attempts to introduce the concepts behind the research field of rheokinetics. Experiments were conducted to intensify the study of these concepts and to verify or challenge various assumptions that accompany work in this field. The experiments involved the use of a Physica Modular Compact Rheometer Model 500 to measure the viscosity of a polymer system during polymerization. All polymerizations were carried out at 85˚C. Styrene monomer and a benzoyl peroxide initiator were used in all reactions. The composition of the polymer system was varied to include either polystyrene powder and/or graphite nano-particles. The shear rate was varied as well, but for styrene to polystyrene reactions only. Both the composition and shear rate were found to have an effect on the viscosity profile of the system, especially concerning the Trommsdorff effect.