The Point of No Return: The Eisenhower Administration and U.S. Intervention in Indonesia 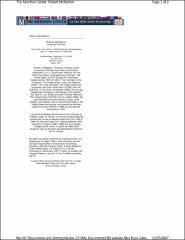 Robert J. McMahon, Professor of History at the University of Florida, has written and lectured extensively on U.S.-South Asian relations. He has written four books: Colonialism and Cold War: The United States and the Struggle for Indonesian Independence, 1945-49 (1981); The Cold War on the Periphery: The United States, India, and Pakistan (1994); The Limits of Empire: The United States and Southeast Asia Since World War II (1999); and The Cold War: A Very Short Introduction (2003). He has also edited Major Problems in the History of the Vietnam War (3rd rev. ed., 2003); and (with Thomas Paterson) The Origins of the Cold War (4th rev. edition,1995). He has published numerous reviews, essays, book chapters, and articles, and he has lectured widely in the United States and abroad. He received the Bernath article prize from SHAFR in 1989 and the Bernath lectureship in 1991.