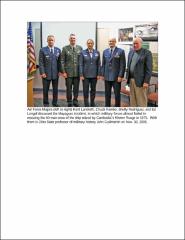 On 12 May 1975, the SS Mayaguez , an American-flagged container ship transiting the Gulf of Siam, was seized by forces of the Cambodian Khymer Rouge navy and the forty-man crew taken captive. Acting in response to orders from Commander-in- Chief Gerald Ford, US military forces were committed to recover the ship and crew and to engage in retaliatory bombing of targets on the Cambodian mainland. The result was the first helicopter assault operation in Air Force history, as USAF Special Operations and Combat Rescue H-53s inserted a reinforced rifle company of Marines on to Koh Tang, the small island where the Mayaguez 's crew was erroneously believed to be held.