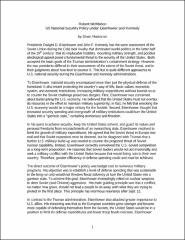 Presidents Dwight D. Eisenhower and John F. Kennedy had the same assessment of the Soviet Union during the Cold War rivalry that dominated world politics in the latter half of the 20 th century: that its implacable hostility, mounting military strength, and positive ideological appeal posed a fundamental threat to the security of the United States. Both accepted the basic goals of the Truman administration's containment strategy. However, the two presidents differed in their assessments of the extent of the Soviet threat, and in their judgments about how best to counter it. This led to quite different approaches to U.S. national security during the Eisenhower and Kennedy administrations.