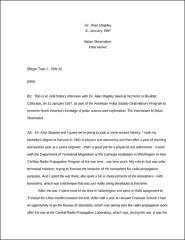 Dr. Alan Shapley began his long polar career in Alaska, where he worked for several years during the late 1940’s on ionospheric and radio research at the Central Radio Propagation Laboratory (CRPL) in Anchorage. He also spent time in Washington, D.C. with the newly created Geophysical Institute. His duties required various trips by C-46’s in Alaska, including Fairbanks, Barrow, Anchorage, and the Aleutian Islands. In 1949 Lloyd Berkner, James Van Allen, and others advocated establishment of another Polar Geophysical Year in 1957-58. The First Polar Year was in 1882-83; the Second Polar Year in 1932-33. Given the major scientific advances of more recent years, especially during WWII, it seemed reasonable to begin soliciting support from various international scientific organizations for a Third Polar Year. But soon the plans expanded from a primarily Polar emphasis to a much more broadly conceived global scientific enterprise. Thus the International Geophysical Year (IGY) was born. Among the disciplines included were geomagnetism, cosmic rays, solar activity, the ionosphere, seismology, gravity, and satellites. Certain days, called World Days, were designated for special emphasis on specific topics, such as geomagnetic storms and northern lights. Shapley was named Reporter for World Days. Much of the preliminary planning and organization for the IGY was done by the US Committee for the International Geophysical Year. Shapley was appointed Vice Chairman of this committee; Joseph Kaplan, Professor of Physics at UCLA, was the Chairman. Various senior people from other disciplines were also named. Among the innovations created for IGY was creation of the World Data Centers for sharing results of scientific findings from the various projects. Shapley recalls some of the details of planning for the Antarctic phase of IGY. Lloyd Berkner was a strong advocate for a new program there. Other important advocates were Larry Gould, President of Carleton College, and Harry Wexler. An early decision to establish the Byrd Station in Marie Byrd Land proved to have been based on faulty scientific observations. Shapley suggested establishing another research Station at the South Pole. After initially refusing, the Navy agreed that when the time came, it would transport at its own expense the scientists and their equipment as far as McMurdo Sound, a logistics base, and an area that was then claimed by New Zealand. Political sensitivities later caused problems and limited certain research endeavors. Much of the funding for the Antarctic project came from the newly created National Science Foundation. Hugh Audeshaw and Shapley prepared most of the detailed budget requests. Annual meetings of CSAGI, known as plenary sessions, were held for several years. There was a large one in Rome in 1954; the last one was in Moscow in 1958. In addition, special Antarctic conferences were held. There was also a special Antarctic Committee; Larry Gould was the Chair. Shapley was a member from the beginning. He also chaired the working group on communications. An essential component of an Antarctic program was a sound radio communication network, especially for collecting and transmitting weather data. Unfortunately there were various political sensibilities that complicated, but did not ultimately prevent, such communications. The Chileans refused to transmit any data through Argentine stations and vice versa. The British would not cooperate with the Argentines and vice versa. Nobody trusted the Russians. Shapley devised a system that mainly allowed scientists to work around these problems. Ultimately, “Weather Central” was created, and the weather data flowed openly. Shapley offers miscellaneous, incidental, personal comments about various people who had some connection to the Antarctic program. Among those mentioned were Tom Jones, Mort Turner, George Toney, Bert Crary, Gordon McHugh Robbin, and Phil Smith. Some of the many international conferences are also mentioned in passing. Shapley went to Antarctica in December 1958 and visited several bases. He made a brief second trip to Antarctica in 1969 and a final trip, including the South Pole, in 1970. Shapley believes the various programs were successful, in particular, the post-IGY creation of the World Data Centers. Major Topics The International Geophysical Year, 1957-58 (IGY) Planning for the Third Polar Year (IGY) at various levels Contributions of key personnel to Antarctic research International frictions that complicated scientific projects Assessment of IGY and Third Polar Year, 1957-1958 Shapley’s pre and post-Antarctica career in Alaska and elsewhere