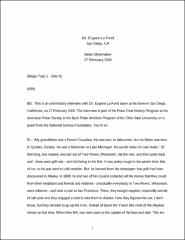 Eugene La Fond was born in eastern Washington of French-Canadian extraction. He was inspired by his grandfather, Godfrey La Fond, who panned for gold in Alaska under trying circumstances, and worked for many years as a fisherman on the high seas. His father continued the maritime tradition, and once sailed to Japan and China. La Fond was raised near the ocean in San Diego, and after graduation from San Diego State University pursued graduate studies at the Scripps Institution of Oceanography. He married his wife, Katherine, in 1935. At Scripps, La Fond was hired to perform various tasks, including drafting, photography, computing, and oceanography, while working on his PhD. He made many cruises on the Scripps, a fishing vessel converted to oceanography, and its successor, the E.W. Scripps. During WWII he worked at the Radio and Sound Laboratory at Point Loma, a division of Scripps. His main job was to collect all the bathythermograph observations in the Pacific and Indian Ocean, and to prepare charts giving the expected acoustic, or radar, range at particular locations for both summer and winter. Considerable data on temperature and depth had been collected, and after the war La Fond returned to Scripps to analyze it further. Soon he was offered and accepted a position with the Navy Electronic Laboratory. There he headed the Structures Section, an office that studied the structures of oceans. One of his first assignments at NEL was to participate in atomic bomb tests at Bikini Atoll. The Navy wanted to learn where the radioactive water would go after the bomb tests. La Fond took Nansen casts and BT observations to get the water structure. These were used to calculate the dynamic height and flow of the water and confirmed that there is an undercurrent at the equator. La Fond was the first person to go on the still hot atoll after the blast to collect water at different areas and depths to find out where the maximum radioactivity was. This was dangerous work; one of his friends, John Lyman, an oceanographer, got too much radioactivity and died. In 1947, La Fond made his first trip to the Arctic aboard the USS Nereus, a submarine tender. The ship visited the Pribilofs, the Aleutians, Kodiak, and Kotzebue Sound. Admiral John McCain, in charge of the entire Pacific theatre, was aboard. La Fond was chief scientist; members of his research team included Walter Munk, Graham Marks, and Fred Root. They took BT Nansen casts, bottom samples, plankton net hauls, and took depth measurements across the Bering Sea. His second Arctic cruise, also to the Bering Sea, was on the USS Cedarwood, a joint effort with the Canadians. La Fond and Dr. Jack Tully were co-leaders of the research team. As before, measurements were taken of ocean currents. A specific project was to measure a big eddy in the Chukchi Sea at the point it converged with the north flowing current from the Bering Sea. Several land stops were made, including to the bay at Teller to replenish the ship’s fresh water supply. They also bought various trade items from Eskimos. His third cruise, in 1950, was aboard the icebreaker, the USS Burton Island. It did similar research but was able to penetrate further north into the ice. On a helicopter flight a polar bear was shot, brought back to ship, cooked and eaten. La Fond did not approve, but reported polar bear tasted like sweet veal. La Fond’s next trip was aboard the atomic submarine, the USS Skate, commanded by Lt. Commander John Nicholson, later an Admiral. They were joined by a second submarine, the USS Nautilus. Traveling under the ice they arrived at the North Pole, and continued on to Greenland, Spitzbergen, and Bergen, Norway, and Belgium. They recorded water depths, current speed and direction, the thickness of the ice, and the light intensity, and surfaced nine times in polynas, areas of open sea surrounded by ice. Once they surfaced only a few miles from the North Pole. This trip, his fourth, was his last visit to the Arctic. In his subsequent career he participated in expeditions to the South China Sea, and the Indian Ocean. His wife, Katherine, was an active participant on these trips, and she adds some personal comments about their life together and some of their joint travels. She kept some of the records of several expeditions. At the time of the interview they had been married 65 years. Major Topics: Oceanographic research in 4 Arctic Expeditions in the 1950’s Bikini Atoll atomic tests Sailing to the North Pole and beyond in the Skate, an atomic submarine Personal reflections from Katherine La Fond, wife of Eugene