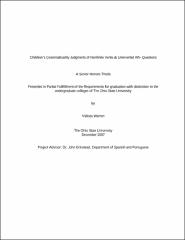 A frequently noted phenomenon in child English grammar is the failure to express tense inflection in verbs, producing sentences like, “He play ball.” Wexler (1994) suggested that children pass through an Optional Infinitive Stage during which both finite and nonfinite verbs would be grammatically acceptable to children. A similar error of child English that has been repeatedly noted is the failure to invert the subject and verb in forming wh-questions (e.g. What Mommy can eat?). In this thesis, I explore the possibility that the optionality of subject-verb inversion is related to the optionality of verb finiteness marking. Rizzi (1996) explicitly proposes such a link by suggesting that in questions, an interrogative feature that is associated with Tense raises on verbs to the head of the Complementizer Phrase (CP). If Rizzi’s theory is correct, then subject-verb inversion (V to I to C) will only take place with verbs that are finite. The implication of this hypothesis is that optional finiteness marking on verbs may only produce V to I to C movement in those cases in which the finite option is chosen. If Rizzi is correct, these two phenomena (verb finiteness marking and subject-verb inversion) should be linked in development. To test this hypothesis, we carried out two "Grammaticality Choice Task" (Pratt & Grinstead 2007) experiments with the same group of 18 children between the ages 3;0-6;0. In the first experiment the children were asked to choose between finite and nonfinite verbs. In the second, they chose between inverted and uninverted wh-questions. Following Rizzi’s theory, we hypothesized that children should be able to correctly identify verb finiteness more proficiently than subject-verb inversion, as a function of verb raising to Tense. In addition to this, we hypothesized that their performance on the two tasks should be correlated, as movement from T to C should only be possible when movement has first taken place from V to T. Results indicated that 16 of 18 children (89%) had better results on the finiteness test (mean percentage correct = 82%, range = 42-100% correct) than they did on the inversion test (mean percentage correct =73%, range 32-100% correct). Further, in spite of this statistically significant difference (paired t-test, t(17) = 2.338, p < 0.032, two tailed), their results were highly correlated (Pearson Correlation = 0.721, p < 0.001). Therefore I argue that because finiteness marking develops more quickly than inversion, and because the development of inversion closely tracks the development of finiteness in individual children, finiteness marking is a necessary condition for inversion. In this way, these results are consistent with the hypothesis that optional finiteness in child English causes optional inversion in wh- questions in child English. Advisor: John Grinstead