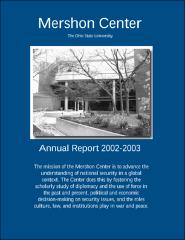 With the United States engaged in combat in Iraq and Afghanistan and Americans aware that violence may strike the homeland, national security remains at the top of the Mershon Center’s agenda. The war on terrorism has both increased the salience of national security and expanded the understanding of what is involved in defending the country. The military is asked to fight wars as well as engage in peacekeeping, policing and even nation-building. The importance of intelligence and the need to coordinate the activities of multiple agencies both at home and with allies abroad is clear. So is the need to understand the motive forces and calculations that drive violent conflict and the methods for defusing and defeating them. The national security agenda is broad and the Mershon Center can make a distinctive impact by focusing on topics that the faculty expertise at Ohio State is especially well equipped to address. In light of changes in the world and at strengths identified in selective investment decisions at the University, a new five-year plan for the Center was approved by the Provost this year. It charts a course for the Center that emphasizes four substantive foci. The first of these is the use of force and diplomacy in world affairs, using the study of military and diplomatic history to draw lessons for the contemporary scene. The second is the decision processes involved in making defense and foreign policies, with an effort to discover ways to improve these. Third, is the role culture plays in diplomacy and conflict as it shapes national, religious and ethnic identities. The fourth foci is the role law and institutions play in managing disputes that can lead to armed conflict. The substantive questions the Mershon Center focuses on are not dealt adequately from any single disciplinary perspective. The Center serves as a catalyst for interdisciplinary cooperation relying heavily on faculty members from multiple departments in the Colleges of the Humanities, the Social and Behavioral Sciences and Law. The Center also serves as a bridge between the academy and the policy making world. The Center does this primarily by emphasizing the scholarly study of central historical and causal claims that serve as assumptions underpinning national security strategies and policies. This annual report highlights the recent publications resulting from this work, introduces some of the people that have played key roles in producing this scholarship and gives a flavor of the content and variety of the seminars and lectures the Mershon Center has sponsored over the past year. Richard K. Herrmann Director, Mershon Center Professor of Political Science