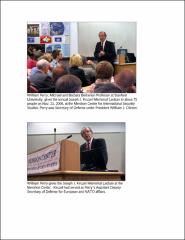 William Perry is the Michael and Barbara Berberian Professor at Stanford University, with a joint appointment at the Freeman Spogli Institute for International Studies and the School of Engineering. Perry was the 19th U.S. Secretary of Defense, serving from February 1994 to January 1997. He previously served as Deputy Secretary of Defense (1993-94) and as Under Secretary of Defense for Research and Engineering (1977-81). His lecture discusses present day security challenges in light of past the security threats faced during the Cold War.

Each year the Mershon Center for International Security Studies selects one lecture in honor of Joseph J. Kruzel, an Ohio State faculty member in Political Science who served in the U.S. Air Force as well as other posts in the federal government. Kruzel was killed in Sarajevo, Bosnia, in 1995 while serving as Deputy Assistant Secretary of Defense for European and NATO Affairs.
Streaming video requires RealPlayer to view.
The University Archives has determined that this item is of continuing value to OSU's history.