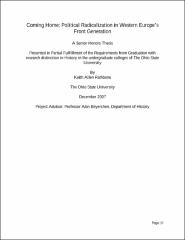 In 1914, Sir Edward Grey, the British Foreign Secretary, famously said, “The lamps are going out all over Europe; we shall not see them lit again in our lifetime.” The start of the First World War signaled the coming assault on the serene and idyllic nineteenth century. During the course of the war almost twenty million people were killed. The battlefields of Western Europe were dominated by the trenches, bullets, shells, poison gas, bayonet charges, mud, water, lice, hunger, thirst, disease, and death. The soldiers who emerged from these trenches after almost half a decade of fighting were changed by the experience. In my thesis, I argue the change experienced in the trenches is visible in the political systems of Western European governments after the war. In 1919, William Butler Yeats wrote “The Second Coming” which echoed the disharmony of the interwar period stating, “Things fall apart; the centre cannot hold.... The best lack all conviction, while the worst are full of passionate intensity.” I will argue that in the interwar period, ex-front soldiers were some of Western Europe’s most unsettled participants. Full of passionate intensity, these veterans attacked the social order from the political left and right and radicalized the society by attempting to replace the ethics of rationality by the ethics of visceral feeling. At the same time, these paramilitary organization’s ideologies crossed national frontiers, language boundaries, and pre-war political orientations. The most visible representation of the violent social discord of the interwar period is the rapid emergence of modernism into Western European artistic circles. Although modernism has its roots in a time before the First World War, the war drastically accelerated the speed at which modernism was being brought to the public. In the postwar period almost all of the artists who participated in the war were avowed modernists and many of them produced violent, anti-democratic, and anti-bourgeois works. Working with the historical record from England, France, Germany, and Italy between 1917 and 1926, this thesis attempts to recreate the political socio-political climate of an era in European history fraught with social malaise. Looking through the lens of modernist artists, I trace common violent, anti-democratic, and anti-bourgeois themes in veterans’ organizations throughout Western Europe. I conclude that fragmentation amongst the left-wing over mutually exclusive economic interests combined with pressure from government supported right-wing groups caused the crucial soldier-worker alliance to collapse. At the same time, the annihilation of the Bolshevik threat, the re-election of conservative governments, and the resumption of more normal economic growth led to a weakening of the political right-wing. Only in Italy did the political center empty bringing Mussolini and the Fascists to power. Nonetheless, the political radicalization which occurred in the postwar period would again prove dangerous for European rationality when these early avant-garde radicals would form the first squads in Hitler’s SA and SS.