Searching for Physics Beyond the Standard Model with a Rare Decay 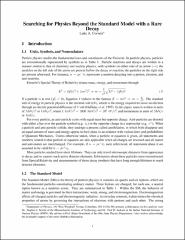 The Standard Model (SM) is the dominant theory of particle physics, which studies the fundamental laws and constituents of the Universe. The SM contains six quarks and six leptons, which are the fundamental particles that constitute ordinary matter. The up, charmed, and down quarks have 2/3 of the electric charge of a proton. The down, strange, and bottom quarks have -1/3 of the electric charge of a proton. The electron, mu, and tau leptons have the opposite electric charge of the proton. For each charged lepton, a neutral lepton known as a neutrino exists. For each of these particles, an antiparticle exists with opposite charge and equal mass. Quarks are always found bound to other quarks. A bound state of a quark and an anti-quark is known as a meson. My analysis focuses on the charged B meson, which consists of an anti-bottom quark bound to an up quark. It is approximately five times as massive as a proton. This meson is very unstable and can decay into many different sets of final particles. The fraction of decays resulting in a given set is called the branching fraction (BF) of that set. I will present the results of my attempt to measure the BF of a charged B meson decaying into a tau lepton and a tau anti-neutrino. The SM prediction for this BF depends on several variables, of which one (fB) has not yet been measured; it quantifies the proximity of these two quarks in a bound state. This decay currently provides the best test of the SM prediction for fB. By attempting this measurement, I also test the BF prediction from the SM. Pairs of charged B mesons are produced by the PEP-II collider at the Stanford Linear Accelerator Center via collisions of electrons and anti-elections (known as positrons) at high energies. Data from these collisions are collected by the BaBar detector. BaBar has the shape of a large hexagonal prism surrounding the collision point. It consists of several concentric subsystems designed to detect different particles and properties, such as momentum and energy. This analysis is difficult because neutrinos rarely interact with matter, so they cannot be detected by BaBar. To overcome this difficulty, I employ and refine a technique that accounts for all detectable results of the decay. I search through BaBar's current data set, which contains more than 300,000,000 charged B mesons, for those events with missing momentum and energy most consistent with undetected neutrinos. I find 245 events in the signal region where 221.7 ± 12.7 background events were expected. The resulting BF is (1.0 ± 0.6 ± 0.1) x 10E-4, where the first error is statistical and the second is systematic. This is 1.3 standard deviations above zero, which is not a statistically significant measurement, but an upper limit can be placed on the BF at the 90% confidence level of 1.8 x 10E-4. This result is a confirmation of the SM, which predicts a BF of (1.6 ± 0.4) x 10E-4, and restricts the options available for theories beyond the SM.