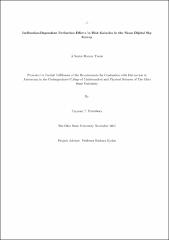 Using the Sloan Digital Sky Survey (SDSS) Data Release 6 (DR6), I study the effects of inclination on the observed color and luminosity of disk galaxies. As disk inclination increases, the galaxy’s light must pass through more dust, which tends to scatter blue light, more so than red. Hence, dust present within galaxies can redden the observed color and cause an overall decrease in the galaxy’s observed luminosity. Assuming the observed disk galaxies are circular, as the galaxy’s inclination increases, their observed shape becomes more eccentric. Hence, I am able to use the ratio of the galaxy’s observed axes (q) as a substitute for inclination. I therefore segregate the spiral galaxies into edge on (q ~ 0) and face on (q ~ 1) groups. Because the light coming from an edge-on disk galaxy passes through more dust, these galaxies tend to be much redder and dimmer on average when compared to the face-on sample. Edge-on disk galaxies also tend to have a much broader spread in their overall color distribution, due to differing types and amount of dust present in each galaxy. These two observations can be corrected by utilizing the face-on sample. In the face-on disks sample, the light from each galaxy passes through a minimum amount of dust, and the effects of luminosity and color extinction are also minimized. Thus, face-on galaxies act as a standard for deriving corrections in color and luminosity for galaxies with higher inclinations. Effectively, the goal is to turn an edge-on galaxy into a face-on galaxy, thus minimizing the effects of inclination dependent extinction on the entire sample of galaxies. By utilizing simple statistical tests, I find that the shifts in luminosity tend to correlate ~ (1−q)^4, instead of the long thought correlation ~ log(q) . Utilizing these results will allow for more robust inclination independent samples for investigations using SDSS.