Effect of Breed on Palatability of Dry-Cured Ham 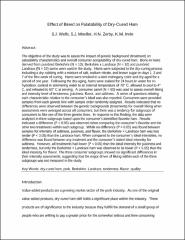 The objective of the study was to assess the impact of genetic background (treatment) on palatability characteristics and overall consumer acceptability of dry-cured ham. Bone-in hams derived from purebred Berkshire (N = 10), Berkshire x Landrace (N = 10) and purebred Landrace (N = 10) swine were used in the study. Hams were subjected to the dry-curing process including a dry-rubbing with a mixture of salt, sodium nitrate, and brown sugar on days 1, 3 and 7 of the first week of curing. Hams were smoked to a dark mahogany color and dry-aged for a period of one year. Following the dry-aging, hams were soaked for 24 hours in water for re-hydration, cooked in simmering water to an internal temperature of 70° C, allowed to cool to 4° C, and reheated to 60° C at serving. A consumer panel (N = 60) was used to assess overall liking and intensity level of tenderness, juiciness, flavor, and saltiness. A series of questions relating each characteristic relative to the consumer’s ideal was also reported. Consumers were provided samples from each genetic line with sample order randomly assigned. Results indicated that no differences were observed between the genetic backgrounds (treatments) for overall liking when assessments were averaged across all consumers, but there was a tendency for subgroups of consumers to like one of the three genetic lines. In response to this finding, the data were analyzed in three subgroups based upon the consumer’s identified favorite ham. Results indicated a difference (P < 0.05) was observed when comparing the consumer’s favorite and the other two treatments within each subgroup. While no difference (P > 0.05) was found between samples for intensity of saltiness, juiciness, and flavor, the Berkshire × Landrace ham was less tender (P < 0.05) than the Landrace ham. When compared to the consumer’s ideal intensities, no difference was found between any treatment and the consumer’s stated ideal intensity for saltiness. However, all treatments had lower (P < 0.05) than the ideal intensity for juiciness and tenderness, but only the Berkshire × Landrace ham was observed to be lower (P < 0.05) than the ideal intensity for flavor. The three consumer subgroups showed no significant differences in their intensity assessments, suggesting that the major driver of liking within each of the three subgroups was not measured in the study.

Research Funding in Support of the Project