Scandals, Politicians, and the Decay of Government Trust 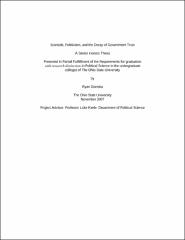 In 1964, when roughly three quarters of all Americans trusted the federal government to do the right thing most of the time, few could have predicted the protracted decay of trust in the United States government that would plague our country into the 21st century. Theories abound for this decline in trust, and yet, no single explanation seems to provide a perfect answer for it. Rather, it appears that a combination of factors account for this phenomenon. Using a quasi-experimental time series design, I demonstrate the potential a political scandal involving the president or a member of Congress has to erode trust in a significant way.