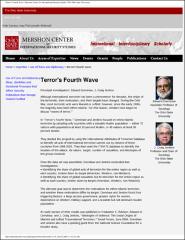 motivations for terrorism
waves of terror

In “Terror’s Fourth Wave,” Crenshaw and Jenkins focused on ethno-Islamic terrorism by sampling only countries with a sizeable Muslim population -– either 70 nations with populations at least 10 percent Muslim, or 40 nations at least 50 percent Muslim. The ultimate goal was to determine the motivations for ethno-Islamic terrorism, and whether these motivations differ by target. Crenshaw and Jenkins found four triggering factors: a large secular government, greater rights for women, dependence on Western military support, and a sizeable but not dominant Muslim population.

Research project for Fiscal Year 2005-06
The University Archives has determined that this item is of continuing value to OSU's history.