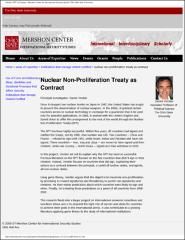 In this project, Verdier set out to explain why the Nuclear Non-Proliferation Treaty has been so successful. Using game theory, Verdier argues that the object is to maximize non-proliferation by promising to reward signatories and threatening to punish non-signatories and cheaters. He then makes predictions about which countries were likely to sign and when. Finally, he is testing those predictions on a panel of all countries from 1968-2002.

Research project funded in academic years 2005-06 and 2006-07
The University Archives has determined that this item is of continuing value to OSU's history.