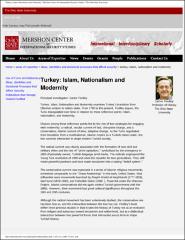 Turkey: Islam, Nationalism and Modernity examines Turkey’s transition from Ottoman empire to nation-state. From 1789 to the present, Findley argues, the Turks triangulated over time in relation to three reference points: Islam, nationalism, and modernity. Choices among these reference points led to the rise of two strategies for engaging with modernity: a radical, secular current of fast, disruptive change, and a conservative, Islamic current of slow, adaptive change. As the Turks negotiated their transition from a multinational, Islamic empire to a Turkish nation-state, the two currents interacted to shape modern Turkish society.