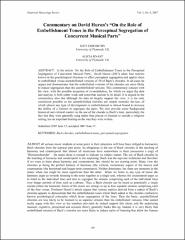 In his article ‘On the Role of Embellishment Tones in the Perceptual Segregation of Concurrent Musical Parts’, David Huron (2007) takes four metrics known in the psychological literature to affect perceptual segregation and applies them to embellished versus unembellished versions of 50 of Bach’s chorales. In all cases he argues and demonstrates that the embellished versions of the chorales are more likely to induce segregation than the unembellished versions. This commentary concurs with his view, with the possible exception of co-modulation, for which we argue the data and analysis is both rather weak and somewhat unclear in its detail. It is argued in the commentary also that although the data do largely support the view, it is the only conclusion possible as the unembellished chorales are simple monodic devices, of which almost any type of development or embellishment is almost bound to increase the ability of a listener to segregate the parts. We also provide some background historical and cultural context as the use of the chorale in Bach’s time, particularly the fact that they were generally sung rather than played or listened to outside a religious setting, has an important bearing on the way they were written.