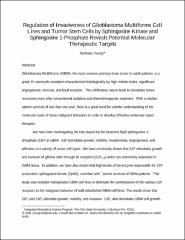 Glioblastoma Multiforme (GBM), the most common primary brain tumor in adult patients, is a grade IV astrocytic neoplasm characterized histologically by high mitotic index, significant angiogenesis, necrosis, and local invasion. This infiltrative nature leads to inevitable tumor recurrence even after conventional radiation and chemotherapeutic treatment. With a median patient survival of less than one year, there is a great need for a better understanding of the molecular basis of these malignant behaviors in order to develop effective molecular based therapies. We have been investigating the role played by the bioactive lipid sphingosine-1-phosphate (S1P) in GBM. S1P stimulates growth, motility, invasiveness, angiogenesis, and adhesion in a variety of tumor cell types. We have previously shown that S1P stimulates growth and invasion of glioma cells through its receptors (S1P1-3) which are commonly expressed in GBM tissue. In addition, we have also shown that high levels of the enzyme responsible for S1P production, sphingosine kinase (SphK), correlate with *poorer survival of GBM patients. This study uses receptor manipulated GBM cell lines to delineate the contributions of the various S1P receptors to the malignant behavior of well established GBM cell lines. The results show that S1P1 and S1P3 stimulate growth, motility, and invasion. S1P2 also stimulates GBM cell growth. Although S1P2 decreases GBM cell motility, surprisingly it increases invasion, by enhancing attachment to extracellular matrix material. This unusual enhancement of invasion by S1P2 also required upregulation of the matricellular protein CCN1/Cyr61, since this effect was blocked by neutralizing antibodies against this effector molecule. Furthermore, we have begun to investigate the role of S1P in both normal neural stem cells and brain tumor stem cells (BTSC) derived from GBM tissue. BTSC are a subpopulation of cells present in GBM which, unlike traditional GBM cell lines, form tumors in animal models that resemble GBMs histologically and invade into surrounding brain tissue. BTSC are likely the formative cells of GBM tumors and may be derived from the transformation of normal neural stem cells. Spheroid invasion assays show that S1P stimulates invasion of both BTSC and neural stem cells, while SphK inhibitors block the invasion of BTSC. These data suggest that these cells are highly responsive to S1P and that enhanced SphK in GBM BTSC could drive the invasion of these cells. In summary, our data identify downstream mediators of S1P in GBM cells that may mediate enhanced malignant behavior of these tumors. Several of these mediators may be useful as therapeutic targets. In addition, our data implicate S1P and SphK in the invasiveness of the crucial BTSC.