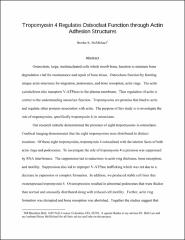 Osteoclasts, large, multinucleated cells which resorb bone, function to maintain bone degradation vital for maintenance and repair of bone tissue. Osteoclasts function by forming unique actin structures for migration, podosomes, and bone resorption, actin rings. The actin cytoskeleton also transports V-ATPases to the plasma membrane. Thus regulation of actin is central to the understanding osteoclast function. Tropomyosins are proteins that bind to actin and regulate other proteins association with actin. The purpose of this study is to investigate the role of tropomyosins, specifically tropomyosin 4, in osteoclasts. Our research initially demonstrated the presence of eight tropomyosins in osteoclasts. Confocal imaging demonstrated that the eight tropomyosins were distributed in distinct locations. Of these eight tropomyosins, tropomyosin 4 colocalized with the interior faces of both actin rings and podosomes. To investigate the role of tropomyosin 4 expression was suppressed by RNA interference. The suppression led to reductions in actin ring thickness, bone resorption, and motility. Suppression also led to improper V-ATPase trafficking which was not due to a decrease in expression or complex formation. In addition, we produced stable cell lines that overexpressed tropomyosin 4. Overexpression resulted in abnormal podosomes that were thicker than normal and unusually distributed along with reduced cell motility. Further, actin ring formation was disrupted and bone resorption was abolished. Together the studies suggest that tropomyosin 4 regulates the adhesion structures of osteoclasts by stabilizing the actin in podosomes and actin rings and thus affecting osteoclast migration and resorption.