Interview of Novice G. Fawcett by Paul Underwood on August 05, 1985 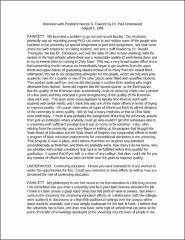 Fawcett discusses successful efforts to attract better faculty and students. High schools were visited throughout the state and OSU began “to get students from the upper thirds and upper halves instead of so many from the lowest third.” This led to postponing admission for many marginal students some of whom were dissuaded from enrolling. Each year the quality of the freshman class improved. Gradually OSU was transformed “from just an institution where anybody could go who couldn’t get in someplace else to a university with sufficient prestige that it was an honor to be admitted.” Another important issue was upgrading and coordinating better opportunities for Continuing Education. One permanent consequence was the construction of the Fawcett Center which opened in May, 1970. The launch of the first Sputnik by the Soviet Union greatly spurred interest in Continuing Education, particularly in technical fields, and aided fundraising for the Fawcett Center. Sputnik also heightened interest in soliciting significant extra funding for public institutions from private sources, long considered the rightful domain of private academic institutions. The federal government in the post-Sputnik era began offering sizable funds to private schools and public institutions chose to enter the fray. The founding of the President’s Club was one such initiative at OSU. This organization aided greatly in establishing endowed chairs for professorships, a relatively new idea at the time. Soon many were established; it proved to be relatively easy to solicit funds for new ones. When Fawcett became President in 1956 he inherited a sizable deficit. After his first three years he never again submitted a budget that was not in the black. This did not mean, of course, that the faculty considered his budgets adequate. Even so Fawcett objected to use of word “austerity” to describe his budgets. More properly what happened was dropping the “incremental budget concept,” which had led to unnecessary hiring at various levels, and going to a “zero-based budget.” Fawcett takes pride in leaving a \$9,000,000 surplus for his successor. When Fawcett became President in 1956 the annual budget of O.S.U. was around \$50 million; by 1972, his last year, it had grown to around \$300 to \$400 million per year. Fawcett discusses the creation of the Slavic Studies program under the able leadership of Dr. Leon Twarog. A benefactor gave Twarog \$10,000 to go to Russia where he acquired a substantial body of library materials at low cost. Twarog “used the resources, he used them honestly, and used them very productively for the university (p. 15).” Finally Fawcett discusses efforts, ultimately unsuccessful, to build a handsome new home for O.S.U. presidents away from the central campus. More than adequate private funds were offered, plans were drawn, but Phil Porter of the Plain Dealer and Jack Fullen helped to derail the building. Years later another house was built at a much greater cost. The basic problem was that it was unwise, for the president to continue living in the traditional President’s House on 12th Avenue.