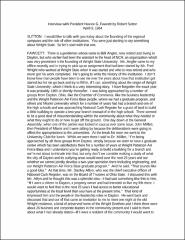 This document deals with the founding of the four regional branches of Ohio State (Newark, Lima, Mansfield, and Marion), the University College in Columbus, and also the founding of Wright State University in Dayton. It details the unusual and successful cooperation of Ohio State, Miami University, University of Dayton, and National Cash Register to start Wright State in 1960 on a campus of 625 acres, all done initially without any state money. As for the founding of the four branch campuses, none had existed when Dr. Fawcett became President of OSU in 1956. At that time Ohio University was starting various branches, contrary to the wishes of other state universities, including possibly a branch campus of Ohio University less than three miles from OSU. Academic centers were started in Newark and Marion “to block off Ohio University spread over the state.” Centers in Lima and Mansfield soon followed. Fund drives were successful in all four cities, and “so we had four free-standing regional campuses.” Fawcett envisioned a temporary association of Ohio State with the four branches, “but they got to be permanent in nature.” And he added “they really have been rather remarkable developments.” Later issues, such as tenure of faculty, and transfer of course credits to Columbus, “all evolved finally to correspond exactly with the rules and regulations of the central campus.” There is brief mention of the founding of the Columbus Technical Institute (later Columbus State), the Agricultural Institute in Wooster, and University College. Fawcett revisits a theme discussed in his Feb. 16 interview, that of the academic reorganization of the various colleges, particularly the unwieldy College of Arts and Sciences.