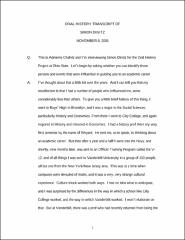 Dr. Dinitz was educated at City College, New York, Vanderbilt University, and at the University of Wisconsin (1947 to 1951) where he earned his doctorate in Sociology in 1951. At Wisconsin he developed a research interest in alcoholism, and the effectiveness of group therapy, such as was being advocated successfully by the newly formed Alcoholics Anonymous. Both his master’s and doctoral degrees were outgrowths of this interest. Dinitz, at age 24, joined the faculty at Ohio State in 1951 as an Instructor at a starting salary of $3,900, considered a good stipend at the time. After seven years he was promoted to Assistant Professor. He taught courses in criminology, a field dominated at the time at Ohio State by Professor Walter Reckless. After an initial period of some coolness, the two developed over time a close professional relationship. Dinitz reflected briefly on being one of the first Jewish faculty members at Ohio State. In his own department there were three other Jewish faculty, although some, he said, seemed more so by birth than conviction. There were a few Jewish faculty members in other departments, such as Louis Nemzer in Political Science. Dinitz always maintained a strong commitment to his faith, and he enjoyed regular monthly meetings at the Hillel Foundation where he made many friends from various departments. Nemzer was one such close friend. Dinitz credits Ray Sletto, Chairman of Sociology for 16 years, with organizing the Department on a solid professional footing. Sletto recruited many outstanding faculty, and some had strong backgrounds in empirical research. John Cuber was the outstanding lecturer, and he also was a notable author and a minister. Indeed, several members of the Department had been ministers, and others had strong religious backgrounds. Teaching was Dinitz’s first love, but he also had outstanding credentials as a researcher. He teamed with Reckless on a long-term project on why certain students in disadvantaged neighborhoods overcame a challenging background to succeed and thrive. The results of their seventeen-year study were published in Juvenile Delinquency: An Experiment on the Prevention of Delinquency. An unfortunate incident involving this study came when The Columbus Dispatch published a questionnaire a student has smuggled out of class. Some vociferous protests followed from a few critical readers, one woman in particular, and Dinitz briefly considered leaving Ohio State. A colleague, Ray Mangus, pioneered the first epidemiological studies of mental illness in a general population. This caught the attention of Dr. Benjamin Pasanamick, newly appointed Director of Research for the Ohio State College of Medicine. In time, this led to a cooperative project between Pasanamick and Dinitz on schizophrenia. Dinitz was even offered a part-time appointment in the Department of Psychiatry. A major new innovation for treating mental illness, psychotropic drugs, became available in 1953. Dinitz and Pasanamick organized a three-year study of a selected group of patients admitted to Central State Hospital in Louisville, Ky. The study concluded that it was safe to keep certain people in the community rather than in the hospital, provided they would take their drugs on schedule. Dinitz reports that this project was the most important research of his life, and in 1967, Dinitz published his book on schizophrThere were certain recent trends in the academic community that Dinitz found unsettling, however. The pressure to get ever more grants, and to publish, became more intense. Some professors used their grants to avoid teaching in the classroom, a practice that Dinitz thought was contrary to the academic mission of a university. These trends have been incremental but inescapable. When Dinitz arrived at OSU in the mid-1950s the ranking of his Department was said to be thirteenth in the nation. It has fluctuated over the years. In 1968, a Swedish millionaire, Hans Zetterberg, was hired as Chairman. He classified the faculty into three categories, “stars,” the “invited” (potential stars), and “frozen.” Nearly all of the junior faculty was “frozen,” and thirteen of them left the department. Zetterberg “absolutely destroyed the department,” Dinitz said. Later, the Department rebounded. In 1981 Dinitz was honored with a festschrift, a volume of essays written by former students and colleagues in celebration of his distinguished career at Ohio State. He spoke to the national reputation of Ohio State in his field of Sociology. enia. Over the years, Dinitz also worked as a consultant to state government. He served on a task force on problems of housing for the aged, and later chaired one of the committees to study implications of the riots at the Ohio State Penitentiary. Since his retirement Dinitz has remained active and has taught at several campuses and in Israel. He trained 39 doctoral candidates during his long career. He had many opportunities to relocate but chose to remain at Ohio State. He worked for a time with the Academy for Contemporary Problems, and on a “dangerous offender” project supported by the Eli Lilly Foundation. He concludes with a few comments about the impact of big money on the university