Observations of Wave-induced Vortices over Ripples 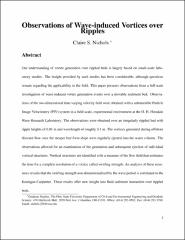 Our understanding of vortex generation over rippled beds is largely based on small-scale laboratory studies. The insight provided by such studies has been considerable, although questions remain regarding the applicability to the field. This paper presents observations from a full-scale investigation of wave-induced vortex generation events over a movable sediment bed. Observations of the two-dimensional time varying velocity field were obtained with a submersible Particle Image Velocimetry (PIV) system in a field-scale, experimental environment at the O. H. Hinsdale Wave Research Laboratory. The observations were obtained over an irregularly rippled bed with ripple heights of 0.01 m and wavelength of roughly 0.1 m. The vortices generated during offshore directed flow over the steeper bed form slope were regularly ejected into the water column. The observations allowed for an examination of the generation and subsequent ejection of individual vortical structures. Vortical structures are identified with a measure of the flow field that estimates the time for a complete revolution of a vortice called swirling strength. An analysis of these structures reveals that the swirling strength non-dimensionalized by the wave period is correlated to the Keulegan-Carpenter. These results offer new insight into fluid sediment interaction over rippled beds.