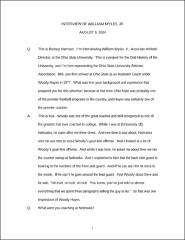 William Myles, Jr., Associate Athletic Director, came to Ohio State from the University of Nebraska in 1977 as an assistant football coach to Woody Hayes. At Nebraska he coached both the offensive and defensive line, and linebackers. He also represented Nebraska in Ohio for recruiting football players. At the time, Myles was one of the few blacks coaching in a Division One school. Hayes made a determined effort to recruit him, and even arranged several job interviews in Columbus for his wife. He coached under Woody Hayes for two years. The firing of Woody Hayes by Athletic Director Hugh Hindman following an incident in the Bowl Game with Clemson was a very sad occasion. Hayes had charged on the field during the game to confront a Clemson player, and the entire incident was broadcast over national TV. Myles says that Hayes was a diabetic, and it is possible that an irregular sugar level might have contributed to his strange behavior. Earle Bruce replaced Woody Hayes as Head Football Coach. Of Woody’s entire staff only Myles and Glen Mason were retained. Myles’ responsibilities remained about the same: the offensive line and recruiting. He mentions various linemen whom he regards as his personal favorites among the many men he coached. These included Chris Ward, Joe Robinson, Bill Roberts and Jim Lachey. Myles later was offered and accepted the position as Associate Athletic Director, briefly under Ed Weaver and later under Rick Bay. He was given responsibility for all men’s sports, including football and basketball. He also had responsibility for Varsity O, and made numerous speeches in the community. During Myles’ tenure, Congress enacted Title IX, which mandated equality for men’s and women’s sports. In time this led to many changes. To achieve a reasonable balance between the two sports programs, the number of players in some men’s sports, such as wrestling and baseball, and eventually football, had to be decreased, while many new opportunities were offered for women. Crew, for example, became a popular sport with women, and eventually achieved as many as 80 participants, almost as many as the number who played football. Myles worked closely with Phyllis Bailey, the first woman Associate Athletic Director at Ohio State. To create further equality in athletics, the women’s program needed a revenue sport. At the time, there were only two on campus: football and men’s basketball. Bailey was given responsibility for the entire basketball program, both men and women. Myles took over supervision of some women’s sports. Myles has great praise for Bailey whom he recalls as one of the all-time great Associate Athletic Directors in the Big Ten. When Jim Jones replaced Rick Bay as Athletic Director, he retained Myles. Myles served, in effect, as Jones’ “right-hand man.” Then, under Andy Geiger, Myles ran an innovative outreach program, in which athletes who had dropped out of school were brought back with a promise of tuition payments if they maintained a 2.0 average, or later, as the program evolved, with a promise of a job, generally somewhere in the athletic department. More than 30 athletes eventually graduated under this program during Myles’ tenure, and the program continues to this day. Graduation rates for college athletes have generated much discussion. Often the athlete comes to college with the idea he will have a successful career in professional ranks. If their prospects appeared outstanding, as in the cases of Clark Kellogg and Robert Smith, Myles did not try to dissuade them. But for others he would urge some thoughtful caution. It sometimes happened that a player who did well in the professional ranks would later make a financial contribution to the university. Jim Lachey, Joey Galloway, Mike Tomczak, and Joe Lukens donated money for endowed scholarships; Lukens named his the “Bill Myles” scholarship. Finally, Myles comments on the increasingly common trend for players to join the professional ranks early. He believes that it is possible for young people to do this in baseball, and even basketball, but not in football, since the sport requires added physical maturity to compete well. He also comments on how Ohio State has made major improvements in athletic physical facilities, and he says that Andy Geiger deserves much credit. In general, Myles is very confident about the future of Ohio State in all areas, academics as well as sports.