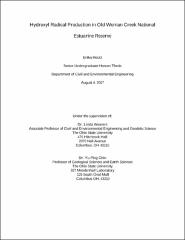 Hydroxyl radical is a powerful reactive species in the natural environment that is capable of degrading many types of organic compounds. Hydroxyl radical is produced in aqueous systems by the direct photolysis, or photochemical transformation, of compounds found in natural waters. This study examined the steady state hydroxyl radical concentration ([OH•]ss ) in Old Woman Creek National Estuarine Reserve (OWC) as a function of fulvic acid, nitrate, and iron present in the wetland waters. Fulvic acid is the chemically active portion of DOM, nitrate is a component of agricultural fertilizers, and iron is discharged in municipal wastewaters. Results show that DOM and nitrate influence [OH•]ss while Iron (III) does not strongly influence [OH•]ss in OWC. Nitrate is the most important photosensitizer in this study: at a level of 450 μM, [OH•]ss increases 3 to 5 times from the corresponding fulvic acid solution of the same [DOC] without nitrate. OWC fulvic acid shows a net production effect with regard to hydroxyl radical. As [DOC] increases, [OH•]ss also increases for all photosensitizer conditions studied. [OH•]ss results were applied to the photochemical degradation of ibuprofen using literature-derived and empirically-determined rate constants. Hydroxyl radical accounts for nearly all of the indirect photochemical degradation of ibuprofen in OWC fulvic acid solutions.