The Bandwagon Effect: Conspecific Attraction and Vulnerability to Ecological Traps 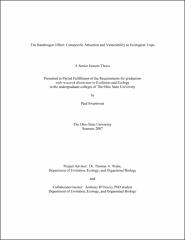 Many animals assess habitat quality using indirect cues. These cues may be reliable indicators ordinarily, but when humans alter the environment, animals may prefer unsuitable habitats. Such ecological traps may be especially problematic for animals that settle preferentially near conspecifics. This mechanism of habitat selection, called conspecific attraction (CA), could lead to heightened extinction risk if individuals caught in the trap lure too many additional settlers. Any such “bandwagon effect” could be ephemeral, though, because individuals that do settle in better habitats should be more successful and so these habitats might accumulate more individuals over the long run. The population could then escape despite an initial congregation of entrapped individuals. We ask whether CA, compared with other mechanisms, may provide such an escape. Only philopatry, preference for the natal habitat, provides a consistent escape. CA performs poorly because individuals lure one another reiteratively into traps. In the face of global change, it is important to recognize how ordinarily adaptive mechanisms of choice can compromise population growth under novel conditions. Such Allee effects may be especially pronounced when individuals seek the company of conspecifics. We highlight the need to avoid setting ecological traps, particularly for species prone to the bandwagon effect. Advisor: Thomas A. Waite