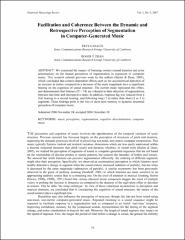 We examined the impact of listening context (sound duration and prior presentation) on the human perception of segmentation in sequences of computer music. This research extends previous work by the authors (Bailes & Dean, 2005), which concluded that context-dependent effects such as the asymmetrical detection of an increase in timbre compared to a decrease of the same magnitude have a significant bearing on the cognition of sound structure. The current study replicated this effect, and demonstrated that listeners (N = 14) are coherent in their detection of segmentation between real-time and retrospective tasks. In addition, response lag was reduced from a first hearing to a second hearing, and following long (7 s) rather than short (1 or 3 s) segments. These findings point to the role of short-term memory in dynamic structural perception of computer music.