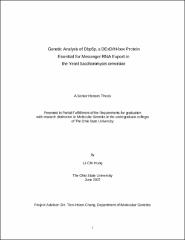 In eukaryotic cells, messenger RNAs (mRNAs) are synthesized in the nucleus and then exported to the cytoplasm, where translation takes place. The export of mRNAs, which exist in the form of mRNA particles (mRNPs), requires conformational changes and interaction with the nuclear pore complexes (NPCs), the gateway that connects the nucleus and the cytoplasm. An essential DExD/H box ATPase Dbp5p, is thought to mediate the conformational remodeling of mRNPs during mRNA export. However, the precise role of Dbp5p is unclear. Here I show, by conducting synthetic-lethal genetic screens that Thp1p, and most likely also Spt7p, function in conjunction with Dbp5p. Thp1p has previously been shown to be involved in mRNA export. Significantly, both Thp1p and Spt7p are known to participate in transcription elongation, confirming a prevailing view that transcription and mRNA export are coupled in vivo. However, so far, there is no report that Spt7p plays any role in mRNA export. My work thus opens a way to investigate how transcription elogation is mechanistically linked to mRNA export, especially in the case of Spt7p.