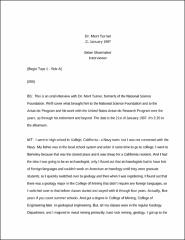 Dr. Turner graduated from the University of California, Berkeley, with a major in Geology in the Department of Mining in the College of Engineering. The Army Reserve permitted him to complete his college degree before going to Aberdeen Proving Grounds. At Aberdeen, Edwin Hubble assigned Mort to the exterior ballistics division, where his primary task was to photograph projectiles flying through the air. Later, he worked with Dr. Goddard in tracking rockets. Dr. Turner helped survey the White Sands Proving Ground and worked with Dr. Werner von Braun. After leaving the army, Dr. Turner earned an M.S. in Geology and did the field work in Puerto Rico. Before completing his thesis, he accepted a position with the State Geological Survey in San Francisco. After a few years, he accepted a position as the State Geologist of Puerto Rico. In 1959, Dr. Turner joined the National Science Foundation, Office of Polar Programs as a project officer. He served in many capacities until his retirement in 1985. It was considered desirable for him to have a Ph.D. He studied in the Department of Geology at Kansas and used his Puerto Rico work for part of the thesis. Upon return to NSF, he was in charge of geology and geophysics and recruited many of the important scientists during this time. Dr. Turner discusses the problems of maintaining research projects when the budget is cut. He also discusses some of the ice core storage problems. In the 1960s and 1970s, the research projects tended toward large groups. It became difficult to convince scientists to do projects in Antarctic. The Bureau of Mines was interested in identifying and locating mineral deposits. Dr. Turner observed that bureaucracy increased under the Nixon administration. The Navy resisted the sending of women scientists to Antarctica. The Navy did not want a scientist from the University of Venezuela to go because he was on the wrong side in the Spanish Civil War. Upon Dr. Turner’s retirement from NSF in 1985, he went to the University of Colorado in Boulder. Major Topics 1. Dr. Turner’s educational background. 2. His work for Edwin Hubble at the Aberdeen Proving Ground. 3. He photographed the flights of rockets developed by Dr. Goddard. 4. As an employee of California State Geological Survey he worked on industrial minerals. 5. His position as State Geologist in Puerto Rico. 6. National Science Foundation Office of Antarctic Programs. 7. The pressure to earn a Ph.D. the selection of Kansas, and how his work was handled at NSF are described. 8. The discovery of various fossils in Antarctica supported the continental drift theory. 9. Bureaucracy grew under President Nixon. 10. The transition from Navy to NSF funding is discussed.