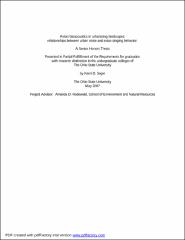 Song is a defining characteristic in avian communication systems because of its role in mate attraction, territory establishment, territory defense, and habitat selection. Therefore, biologists are increasingly concerned about potential behavioral and reproductive consequences of anthropogenic noise as it creates novel acoustic environments for birds. In this study, I examine the extent to which acoustic noise in urban environments influences the song characteristics and/or singing behavior of passerines. I predicted that, in response to loud noises, birds may (1) increase singing rate and/or repetition of songs (including percent of time spent singing), and (2) adjust song characteristics such as pitch (frequency) and song length. Both of these strategies have the potential to improve signal transmission by reducing overlap of signals with ambient noise. Preliminary decibel level data were collected in four a priori environments to establish the amount of noise disturbance in relation to the type of urban area. From May – July 2006, song frequency, duration, and singing rate were measured for 42 Northern Cardinals (Cardinalis cardinalis) and 53 American Robins (Turdus migratorius) in forests located within these four increasingly louder acoustic environments (rural to residential, commercial, and highway) in central Ohio. Song characteristics were digitally measured via computerized spectrogram analysis. As predicted, frequency range was positively correlated to noise level for both species. These data suggest that anthropogenic noise may influence avian singing behavior and therefore has the potential to be a relatively novel selective force in urban areas.

Will be presented at the 21st International Bioacoustics Congress in Pavia Italy in September of 2007, then pulished in the proceedings from the congress.