The Relationship between Exports and Growth in Select African Nations 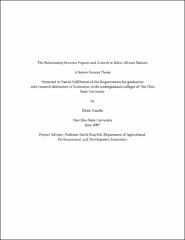 The relationship between exports and growth is an important one in economics, particularly for developing nations that seek to improve the livelihoods of their citizens through economic reform. This paper analyzes the theories behind the role that exports play in growth, and seeks to use regression analysis for four African nations’ economic data from 1981-2003, namely the Democratic Republic of the Congo, Guinea Bissau, Malawi, and Nigeria. The data show a mostly positive relationship between exports and growth and mixed results for the other independent variables, investment and population.