The Pandects of Antiochus: Slavic Text in Transcription 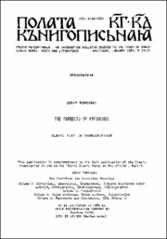 Antiochus, a monk of the Lavra of St. Sabbas near Jerusalem, compiled his Pandects about the year 620 at the behest of his Galatian compatriot Eustatius, abbot of the monastery of Attalina near Ancyra, as a "vademecum" of Christian monastic spirituality, morality and practice. It consists of: an epistle of Antiochus to Eustatius, Prologue, Index, 130 Homilies, Testimony and prayer about the devastation of Jerusalem, another epistle to Eustatius, including a curriculum vitae. His compilation is based on the texts of the Old and New Testament, the Apocrypha and the fathers of the Church available at Jerusalem at the beginning of the 7th century and forms a prime source for their knowledge. His own additions are a prime source for the devastations by the Persians (6l4) and the state of the Church in Jerusalem. The Slavic translation was made before 950 (according to Kopko, Durnovo and Hahn, in Macedonia), using for the biblical quotations the earliest, probably Methodian, translation of the Bible (all biblical quotations were especially marked in the margin). It was written in the oldest known form of the Glagolitic script and has survived in three independent transcriptions into Cyrillic, the first two of them almost contemporaneous original transcriptions, the third a late copy of another (in many ways more competent) transcription. This edition of the text is based upon the manuscript V (Cod. Moskva, GIM, Voskr. 30, 11th century [before 1050?]), complemented by the manuscript P (Cod. Moskva, GBL, F.228 [Piskarev] 205.1, 11th century). The detailed investigation of the transmission led to the identification of 5 manuscripts directly related to V (it was the antigraph of the first, and the protograph of the others), which could safely be used to fill other gaps in the text of V.