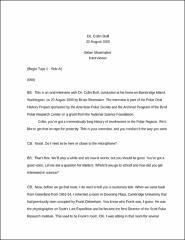 Dr. Bull was born in Birmingham, England, grew up in Herefordshire, and became a U.S. citizen in mid-1970s. When he was young, Dr. Bull read books regarding on Antarctic expeditions such as “South with Scott,” by Evans and “Mid-Ice” by Georgi on Wegener Greenland Expedition, which impressed him deeply. Dr. Bull attributes his interest in the polar regions to his association with Scott Expedition members – Fritz Loewe, Georgi and Sorge. Dr. Bull received his PhD at Birmingham University in Condensed Matter Physics in 1951. Dr. Bull went on his first polar expedition to Spitsbergen in 1951 under Sir Raymond Priestley’s patronage. He also volunteered for the British North Greenland Expedition led by Commander C. J. W. Simpson between 1952 and 1954. During this period, he, Mike Banks and Taffy Oakley attempted to measure the thickness of the ice by gravity in the areas of St. John’s Fjord in Prince Charles Foreland. They traversed North Greenland for their magnetic recording, and he calls it “the slowest traverse of Greenland on record.” When he came back to England, he lectured about the expedition and edited a book on the subject, which eventually became Venture to the Arctic, published by Penguin. A couple of books about the expedition were written by the members: North Ice by the leader Simpson and High Arctic by Mike Banks. He also went on the expedition to Norway to the Austerdalsbrae Glacier in 1955, and then 1958-1959, South Victoria Land, and 1960-1961, Sukkertoppen. In 1963-64, he went to Byrd Station and participated on the traverse out to the Whitmore Mountains. In 1956 he married. Shortly afterward, he departed for New Zealand in order to take a lecturer position at Wellington University. Upon his arrival, Dr. Bull organized the Victoria University of Wellington Antarctica Expedition. The members of the first New Zealand Antarctica expedition of 1958-1959 led by Dr. Bull included Peter Webb, Barrie McKelvey, and Dick Barwick. Their research was conducted in the Dry Valleys near McMurdo. Dr. Bull named the Wright Valley after Sir Charles Seymour Wright of the Scott Expedition. Bull Pass, the McKelvey Valley, Webb Glacier and the Barwick Valley were named by this expedition. While in New Zealand he made a concerted effort to take women researchers to Antarctica, but without success. Dr. Bull organized a follow-on expedition for the 1959-60 season that included a woman research member named Dawn Rodley. The U.S. Navy refused to fly her to the Dry Valleys, however. This was probably the first effort to include a woman researcher in a modern Antarctic Expedition. In March 1961 Dr. Bull took a position as visiting professor at the Institute of Polar Studies, The Ohio State University. The position became permanent and he worked at OSU for the following 25 years. He was Director of the Institute from 1965 to 1969. He then became Chairman of the Department of Geology, and then in 1972, he became Dean of Mathematics and Physical Sciences and served on many polar boards and study groups since that time. Dr. Bull helped write the proposal to the family of Richard E. Byrd in 1972 requesting that they archive his papers at Ohio State. He promised to change the name of the Institute of Polar Studies to the Byrd Polar Research Center if they did. The family accepted and BPRC is today an established national institution. Dr. Bull sponsored many scientific expeditions to the Antarctic and the Arctic during this period. He is especially proud that he sponsored 14 researchers for their doctorates and imported many other high quality researchers to Ohio State. In 1969 he sponsored the first female field expedition to the Antarctic led by Dr. Lois Jones and including Kay Lindsay, Eileen McSaveney and Terry Tickhill. He has been on most polar boards including the Polar Research board, and was also Chairman of the SCAR Working Group on Glaciology. He retired in 1986 moved to Bainbridge Island Washington where he is active in the polar tourist business and collecting and selling books from the Polar Regions. He has since made eight trips to Antarctica with tourist groups. Major Topics 1. British North Greenland Expedition led by Commander C. J. W. Simpson between 1952 and 1954 2. Wright Valley and Sukkertoppen Ice Cap 3. The first female field expedition to the Antarctic 4. SCAR (Scientific Committee on Antarctic Research) 5. INSTAAR 6. IAATO — International Association of Antarctic Tour Operators