An Examination of Desert Geomorphology Throughout Geologic Time 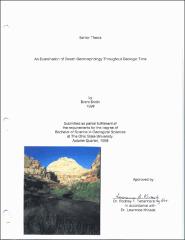 The aim of this paper is to describe the evolution of desert environments including descriptions of past, present, and future desert environments. The impressive Navajo Sandstone will serve as an example of deposits of a former desert which over time became lithified, whereas the Sahara Desert will serve as a modern example. As far as the future is concerned, aspects of modern desertification and mankind's role in it will be discussed.