Free Will: A Comparative Study 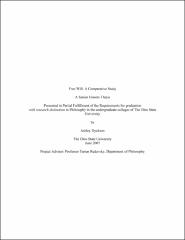 The purpose of this thesis is to compare the solutions to the problem of human freewill that are proposed in two traditions: Medieval Christianity and early Buddhism. Both traditions hold that human actions are free. Both also attempt to justify their conceptions of freewill with regard to other, perhaps contradictory, beliefs that are also a part of each system. Medieval Christian philosophers attempted to prove that humans have freewill despite God’s is. The philosophers tried to resolve these issues by combining human freewill and limited omniscience. Freewill in the Buddhist tradition involves a law of cause and effect; human action is the result of this law. I believe that my research will conclude that there are similarities between the Buddhist and Christian attempts to explain human action and sin. To perform this research, I will analyze texts from both the medieval philosophical tradition and the Buddhist tradition.