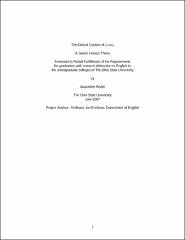 Vladimir Nabokov’s novel, Lolita, has been controversial since its original publication in 1958. The book has been called immoral and pornographic, mainly as a consequence of its focus on Humbert Humbert, the murderer and pedophile who narrates the work. The goal of my thesis is to show it is dangerous and shortsighted to dismiss the novel as simply immoral. Rather, it is a complex work that confronts the reader at every turn, inviting her to be empathetic to the narrator, and then reminding him that the man has committed rape and murder. These abrupt changes in perspective are an astounding achievement for Nabokov, as they challenge the reader’s expectations of how he will react to what he considers right and wrong. In my thesis, I explore how the aesthetics of the text combined with Humbert’s educated rationalizations of his behavior repeatedly invite the reader’s sympathy in the face of the deeds he has committed. I also reveal how Lolita’s wounded voice can be heard despite these distractions, resulting in a highly moral content exploring the relationship between a criminal and his victim. My research methods include a literary analysis of the text, as well as an investigation into the scholarly work on the novel. I have discovered that the conception of the novel as immoral is a consequence of Humbert’s powerful prose, which includes beautiful imagery, captivating metaphors, entertaining word play, and comical encounters to mask the depravity of his actions and manipulate the reader’s emotions. Additionally, he repeatedly rationalizes his behavior on a number of grounds, principally that it is logically acceptable, is a misunderstood consequence of his identity as an artist, and a result of his genuine love for Lolita. However, the discerning reader can see through the transparency of these objections and recognize how poorly he treats the young girl he claims to love. Furthermore, Lolita’s voice can be heard beneath Humbert’s narration and often contradicts his account of the novel’s events. As the reader begins to understand the horror of Lolita’s situation she becomes less sympathetic towards Humbert and is able to recognize the immorality of his actions. Nabokov claims his book “has no moral in tow,” yet the work clearly has a moral content as the reader gains insight into the relationship between Humbert and Lolita, and recognizes Humbert for the immoral man he truly is. Thus, a work that appears immoral from the outset may have a compelling moral message for the discerning reader and one the author himself may have failed to recognize.